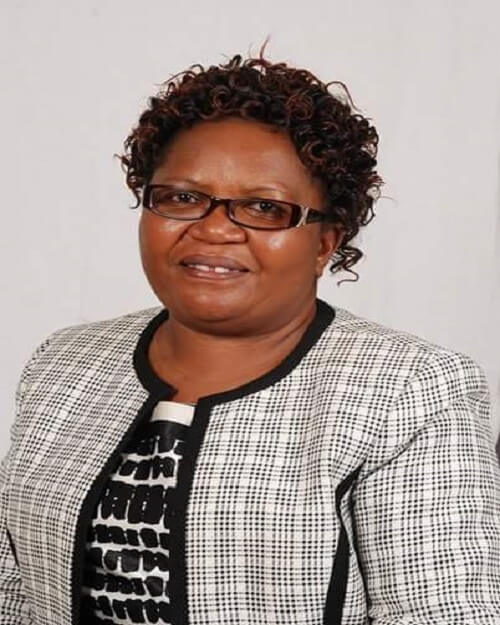 Moira Ngaru, is a Gender and Development Consultant.   Currently she is a consultant Director for Professional, Women, Executive and Business Women’s Forum (PROWEB), and organisation that seeks economic empowerment for women.  Moira is  the former  Executive Director (2005-2015) of Farm Orphan Support Trust (FOST), an organisation that seeks to mitigate the impact of HIV&AIDS on children particularly those in farming communities of Zimbabwe. To attain this, FOST works with women, girls, grandmothers and community structures to ensure that their rights and those of the children are realised in the process of responding to the AIDS pandemic.

Moira Ngaru has a wealth of experience and expertise having devoted her career in the area of women’s and children’s rights while working in the Government and with civil society. She started her career as a Mathematics teacher from 1982 to 1984. She then joined the Curriculum Development Unit in the Ministry of Education where she strengthened her research, writing and facilitation skills. She also gained vital project management skills in the process. Her interest in women’s issues began when she was appointed the gender focal point for the Ministry of Education. This exposed her to women’s organisations and to gender training programmes.

She left the Ministry to join Zimbabwe Women’s Resource Center (1998-2000). She worked in the capacity of Gender Programme Officer. Her responsibilities included gender training for organisations and private companies, analysis of gender policies and development of gender training materials. From 2001 to 2002 she was the Research and Information Programme Officer for Musasa Project where her responsibilities were generating information for public information on domestic violence and related issues. From 2003 to 2005, she was appointed the Country Representative for Discovery Channel Global Partnership (DCGEP) which promoted the use of technology in development. From December 2005 to2015  she  was the Executive Director of FOST.

In addition to the above, Ms Ngaru’s accomplishments includes a lot of consultancy work on gender, women and HIV& AIDS. She has written or contributed to a number of training manuals currently in use by organisations working in these fields.